Kolkata chicken biryani recipe is an amazing combination of fragrant rice, succulent chicken, soft golden potatoes, and glistering boiled egg. A mild, flavorful, hearty meal that no one can ever resist.

Kolkata biryani is a delight for biryani lovers. No Bengali occasion would complete without a chicken or mutton biryani on the menu. Calcutta biryani is believed to be adopted from Awadhi biryani. The indigenous flavor, mouth-watering taste of this biryani is just incredible.

I am a big fan of Biryani in almost any form and this Biryani is one among them. While I do not claim that this recipe yields you the authentic Kolkata chicken biryani, but I have tried my best to put together the Kolkata recipe. You can also make Kolkata Mutton biryani by using the same recipe.

In this chicken biryani, the marinated chicken and rice are cooked separately first, then cooked dum style in layers. This recipe does require a little bit of planning and preparation to do. But once you are ready with the ingredients, you can do the cooking part simultaneously.

This chicken biryani is a flavorsome and tasty meal in itself. Even kids love this. Serve this as it is or with shahi chicken changezi or chicken lababdar accompanied with raita for weekend dinner or lunch and relish with your loved ones! 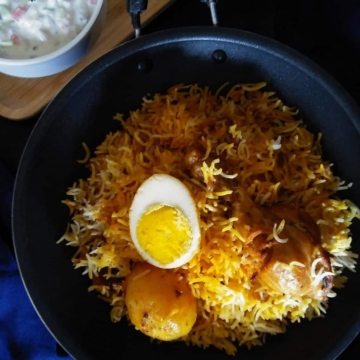