Panchamrit/ Panchamrut/Panchamrutham recipe is the holy concoction of five ingredients used in Hindu rituals as an offering to the Gods. It is believed to be sacred and pleases the deities. Usually, it is served on auspicious occasions like Janmashtami, Shivratri, and .

It tastes truly delicious. When I was a child I used to ask for more.

It also enhances immunity, intellect, and memory power. Nourishes the skin. Hence it can be used as a skin cleanser.

To make this panchamrit all five ingredients should be taken in equal proportions. However, Tulsi (basil leaf) is used while offering it to deities. The addition of Tulsi leaf is considered to be auspicious and lends a beautiful taste to this. After the puja, it is distributed as a prasad, any leftover of this sacred drink is poured on a Tulsi plant or in the Tulsi pot.

Many people add sugar to this. But sugar is inappropriate to use in this. As sugar is not natural and sometimes sugar is refined using bone charcoal.

Panchamrut is often used as libation during 'Abhishek' or 'bath of the deities'. Lord Shiva is bathed in this holy mixture on Shivratri and also for the entire month of Shravan.

Besides this, I use my homemade milk peda as an offering, especially on Janmashtami. 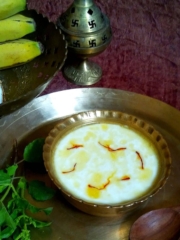 Adjust the quantities of the ingredients as per your preference while making it on fasting or vrats.