Kaddu ki kheer with jaggery is an easy-to-cook, delectable dessert, made using red pumpkin, milk, ghee,  jaggery, saffron, cashews, and raisins. It can be enjoyed by people of all age groups. If you want an easy not so elaborate dessert. You can try this.

The pumpkin kheer recipe I am sharing is very simple. I have used red pumpkin, milk, jaggery, ghee, saffron, cashews, and raisins in this. And for flavor, cardamom and nutmeg are used. I always have a packet of organic jaggery powder handy in my kitchen. If your jaggery contains impurities. Then you need to make the jaggery syrup. To prepare this syrup heat the jaggery with a little amount of water. Then strain and mix that at the end of the cooking process. As jaggery sometimes curdle the milk.

For the second method, you need the same quantity of cooked, mashed pumpkin. Just cook the pumpkin with water or steam it until cooked. Then mash and cook with boiled milk until desired consistency. Finally add the sweetener, flavoring ingredients, and any chopped nuts of your choice. Then serve. No addition of ghee or oil is required in this method.

This pumpkin kheer can be relished by anyone with a sweet tooth. It can be an interesting and delicious dessert for those who are not a fan of pumpkin.

Below I have mentioned a few variations to this recipe.

Few similar recipes you can check. 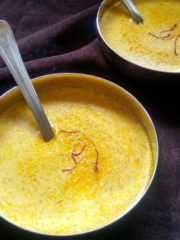 Add jaggery at the end of the cooking process and don't cook for a long time after adding jaggery. As jaggery sometimes curdles the milk.